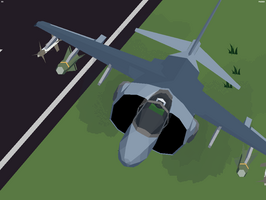 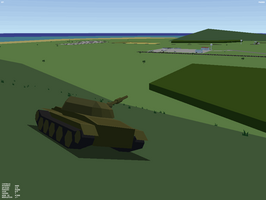 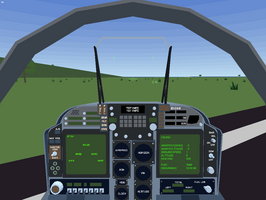 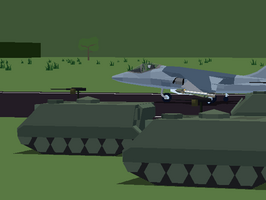 To say it's been an eventful time for me recently would be an understatement. At the beginning of April, I was laid off from my job. Between that, and thoughts I was having at the time, the game was in limbo for a few weeks as I pondered the details and a possible new direction. I needed to figure out what I want to do for the coming months, and decided to take a bit of a risk.

Here's the plan going forwards: For at least the next 2 months, I will be working full time on Tiny Combat. I'll be focusing it down, and specifically building out the boring features needed for a releasable game, rather than the meandering tech demo it currently is.

What this means is that the game's scope is going to change. In the short-term, this means a de-emphasis on the nebulous "Arena" mode, and a new emphasis on more straightforward and easy to define modes such as instant action. However, the core gameplay: the accessible light sim, will absolutely remain.

The biggest change you will notice, is a reduction in flyable plane count to focus on quality over quantity. Expect a real, 3D cockpit. For the moment, I plan on having only one plane fully featured and flyable on release: the AV-8B Harrier II, but the game will absolutely be built to support more as it always has. I want to see more planes and loadouts just as much as you, but I need to de-scope things if I want to try and turn this into something real.

I hope you all bear with me, as changes will be made. I'm sure some of them might not be popular, but I really want to have something I can show for all the work I've done. Something I can actually ship.

I look forward to the next demo day. The feedback I've gotten on this project over the course of its development has been instrumental in its success. It keeps me honest, and it shows me where the problems that need to be worked on lie. Thank you all for the recent surge in attention. It's been very humbling, and knowing that there are many more out there besides me looking for this kind of game makes me hopeful for the game's future.

For more information on the future of the game and its features, please see the new and updated FAQ

It has been 1 year pls just release it

Can you provide a link for the current most updated game?

Any idea of when it will be released now?

You are doing a great thing. I love an Ace Combat competitor, and I love the good mix between cool, "realistic" feeling, and arcade immediacy.

Make sure to add Fox 3s in the game, theyre long range capabilities would actually make missile evasion tactics actually useful unlike just popping out flares until the missile steers off and would also allow BVR or Beyond Visual Range combat

game is great so far. if your looking for more aircraft i have some others to consider

Thanks so much for adding the Harrier, I love you.

when is a new update coming?

So how is the player going to control the vectoring nozzles?

There's nozzle up/down buttons that you hold to raise/lower them. You can also bind it to an axis to control it directly.

This Game is awesome !!! thank you for creating this game and making a great updates ! keep the great work !

Someone could confirm that the Day 30 version is still the latest?

Yes, this is the last version of the game :)

I'm too eager to see the next demo release! I played the current version for the last few days, on and off, and I'm just too impressed with what you have here. Nothing but a map, a few A.I. fighters and a couple of harder targets to take down (I.E. Airstrips or Ace fighters)... truly impressive to get people hooked with such few assets! I hope the next version comes out soon, Phlydaily put your title on the map with a video a few days back and now I see so much buzz on this page-which it rightfully deserves; you have a great opportunity to make this game great! Hope you do well in the future and I wish you luck with your development

I've been playing this demo for the past few days and I am in awe! You get no missions, just a map, and can fly around doing whatever.. it's an open world (?) dogfighting game. Wow. I didn't know I needed this in my life.

The feeling of finding and fighting the named enemies for the first time was both scary and exciting, and just like one of the previous commenters said, I feel the names really add something special to the encounter. And I love the naming theme, I think it fits and I even hope it stays!

Exploring the map feels really good too, and I think this is the point that I find the most interesting. The current demo at times makes me feel like I'm playing an exploration focused dogfighting game, I fly around an island, looking for interesting terrain, secrets and tunnels, and challenging fights, and on the way there will often be an enemy that crosses my path that I end up fighting, or evading.

It's really exciting to think of the possibilities if this is the kind of direction the game is going in the long term. Makes me wonder, will we get to explore a larger map in the future and find surprise named encounters that don't show up on the sortie map screen?

Oh also I love the photo mode, it really gives the art style a place to shine, I've already taken so many screenshots...

I'll try to keep this in mind. Thank you.

I adore this game, its just like war thunder but without the grind and its own unique charm. This early alpha has become my go to game to play when I am bored and i cannot wait for it to be more fleshed out. I can already foresee you stealing all my future hours of free time. Than you so much for the incredible project.

I love the game so far, and I can tell that you are very passionate about its development. The harrier animations look great. I love the artistic style of the game mixed with realistic-ish flying mechanics. I find myself getting excited in a turn-fight with the mig-21 sometimes, and end up doing about 80 knots at 60 degrees AOA. This game has real potential, but there are a few small things that stuck out to me, besides the things associated with a technology demonstrator. I am saying all of this in sheer awe of the beautiful game before me, and out of the hope that I can maybe help by throwing some ideas your way.

Id love to see more than just three planes once you get the Harrier fleshed out, as I found myself using the F-20 most of the time due to the sheer overpoweredness. This game is so good, I could eventually see it branching away from fighter planes to include things like bombers and support planes.

The addition of difficult ground targets would add an new layer of realism, as well as present unique challenges for players to overcome. Having to scan the skies and watch out for SAMs at the same time would make enemy bases harder to capture, and more rewarding to fight.

I LOVE the named enemies, you should keep some form of these challenging adversaries in the final cut. It lets the player feel like they are fighting an enemy pilot, and not just mig-21 drones.

The 3D cockpit is a great idea, and will work really well with joystick controls I think. If there is an option though, Id still love to have a view from outside the plane. When I'm turn-fighting, I can tell my airspeed by seeing the vapor come off of the end of the wings, and I can maneuver the camera to see the enemy in the turn with me. It's a great mechanic, and I'd love to see it stay.

With all of that said, I'm just one person, and not a reflection of the group that plays the game. You have given us a great demo to play, and I'm sure what you deliver in the end will be jaw dropping. Thanks, and good luck!!

p.s: The alpha testing idea in this comment section is a great idea, and if that's something you decide to do, I'd love to participate.

This is very good feedback and criticism. I really appreciate it.

One bug I've found is that after a while there are so many plane wrecks on the ground that the game lags. Should probably make them despawn after a time

Make a patereon, id easily give you $20 a month to test early build of this game

Could I help by testing alpha versions?

Perhaps there could be an alpha discord, in which we could give feedback/ idea focus groups. If you wanted to give multiplayer an attempt, it [discord, etc.] could be a good way to coordinate small groups to be on specific servers at specific times