This game was made for a personal week-long game jam. No further development is planned.

Vector Fury is a simple arcade action flying game. You fly a small VTOL fighter armed with a cannon and a selection of 3 different secondary weapons. Take out land targets on islands, and ships with destructible turrets to complete a short 6 mission campaign!

The structure of the game is loosely based on Wings of Fury, an old side-scrolling WWII airplane game.

This game is designed to played with a gamepad. Basic keyboard controls are provided as a back up, but are not recommended. Joysticks are partially supported. If using a joystick, it's recommended to use it in combination with the keyboard like it's 1993.

The physics for the game are simple and responsive, but have some simulator like depth to them.

G-Limits: The plane can only pull so many Gs. This translates to slower turn rates at higher speeds. Keeping the plane between roughly 300-400 knots will maximize your turn rates.

Fuel: As the plane flies around, it consumes fuel. Fuel is displayed on the HUD as a percentage filled. If the fuel runs out, the engines shut off and you'll have to abort the mission. Fuel consumption is proportional to throttle, so you can save fuel by flying at lower throttle settings.

VTOL: By lowering the nozzles, the plane can hover in mid air. When pushed all the way to 100 degrees, this actually points them slightly forwards, allowing you to slow down or even fly backwards to a limited extent. If attacking an undefended area, you can slow to a hover and gun everything down.

The game features 3 different weapons in addition to a cannon which is always equipped. All weapons have limited ammunition.

Cannon x600: A high velocity gun. This precise and reliable weapon is always available and with enough ammo can destroy even the heaviest armored ships.

Torpedoes x3: Extremely powerful anti-ship weapon. Must be dropped into water so that it can "swim" towards its target. Deals minimal damage if dropped onto targets from above.

A variety of ground and sea targets appear during the game. Here's a brief rundown of each:

Ships have several features to make them unique from their land-based counterparts.

First, ships have armor which makes them resistant to splash damage from explosive weapons. To maximize damage, you'll need to hit them directly with a bomb, rocket, or torpedo.

Second, ships have large turrets that can be independently destroyed. Taking out the turrets can make approaching and destroying a ship much safer. You'll also be rewarded the full point value of a turret if you destroy it individually.

Vector Fury was put together in a week. I wanted to take a break from Tiny Combat Arena, and realized that a short and simple game would be a great way to test many of the ideas that had been floating around in my head lately. Many great features of Tiny Combat have come from these little one-off projects, such as the data-driven nature derived from Tiny X-Wing.

Like those projects, much of the code in the game is experimental. I've learned so much about how game design should work, to the point where I'm almost convinced that I've been building games backwards this whole time. Rather than building from the bottom up, creating cool little game mechanics and then hoping a game can be built out of it at the last moment, instead this game was built with the full game loop in place from the very first day.

Building a game into a framework, rather than trying to somehow form a framework around an amorphous mass of mechanics, really does seem like the way to go. This game uses so many new (for me) programming concepts, Unity features, and architectural decisions, to incredible success. This game will likely influence everything I work on going forwards.

is there a 32 bit version

um the textures are broken, is it just mine or is i t happining to evrey one

You'll have to give more info than that. A screenshot would help too. If you're seeing pink textures everywhere (guessing), what are your computer specs and are your graphics drivers up to date?

im using a dualshock controller with ds4windows and for some reason game doesnt know what to do with it www.youtube.com/watch?v=FdN42LOa9GQ

well that did not embed

I just tested with my own DS4 using DS4Windows and it worked fine. Do you have other controllers connected to your computer that might also be sending input to the game? I know when I have my throttle connected and it's pushed forward, it'll send erroneous input to most games, so I need to make sure all of its axes are zeroed out when playing anything.

Ok so I played the game and there was no sound. Also I got stuck. I made a Youtube on your game. The graphics are cool at least

If you lowered the throttle, you could have righted yourself. With the throttle maxed as it was, you were basically pushing yourself into the ground. You're not missing anything with the sound. There is no sound.

Have you considered supporting keyboard and mouse? The current keyboard operation  is not good

I considered it, but I didn't want to spend the time for a quick one-off game. I was already doing a lot of experimental stuff with the controls (i.e. Unity's new Input System) and didn't want to add more complexity on top of that.

Did you make all models by yourself?

The terrain is from LMH Low Poly's terrain pack. I highly recommend it and use it for a ton of projects because they look good and are so versatile. Every other model, I made myself in Blender.

Great job! Thanks for your advice, I'll check it

Looks great! Since you're not planning to do anything with it further, are you willing to make it open-source for others to build upon it?

I think the flight model I probably will at some point, since I really like it and is so self-contained it's ported pretty much 1:1 from its test project. Pretty much all the other mechanical parts of the game, such as the weapons, are sourced almost verbatim from my own GitHub.

The game as a whole actually feels like a decent start for a future (if simple) product, so I'm hesitant to just open source the entire thing. People would also have to purchase Shapes (which I highly recommend either way), since this game makes heavy use of it.

That said, I know people have done some pretty wild things with reverse engineering and hacking stuff into Unity games recently. As long as they don't profit off it, I have no qualms with sufficiently motivated people doing that and expanding the game that way.

No sound in this version, which is a little disappointing. Flying seems very slow but perfectly responsive. Controller support works great with my PS4 controller, but the keyboard control scheme is very lacking. Also missing the ability to control the camera, which can be frustrating when searching for targets.

I updated the game to support a free look with the right thumbstick. That is probably the last feature I'll add to the game, as I don't plan on continuing development.

This is great to see. I was excited at the prospect of the Harrier entering Tiny Combat, so I'll be sure to try this out to see what it feels like!

Having played it, very promising, a little hard to pick up the controls at first, and a little strange to see a harrier with torpedoes (did it ever carry them in real life?) but still beautiful

The Harrier cannot carry torpedoes in real life! At least, not to my knowledge. My main inspiration for this, Wings of Fury, has them and I thought it would be fun to add in even if it's not realistic. This game is full of weird ahistorical stuff to begin with (Flower corvettes in the same game as a Sea Control Ship?), so it doesn't stand out too much I think. 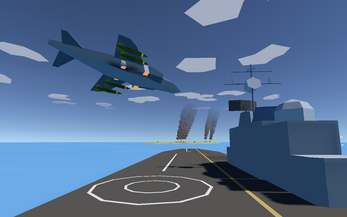 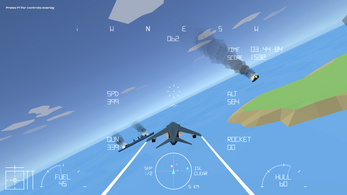 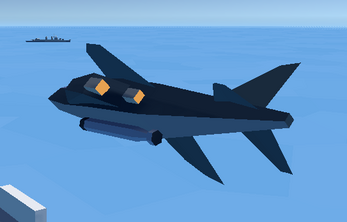 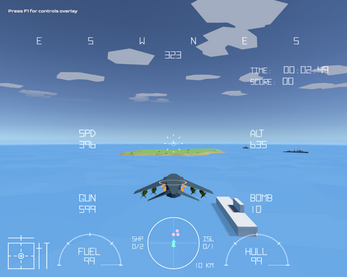 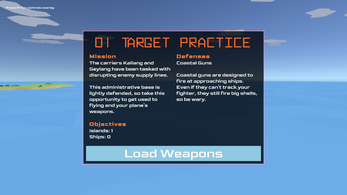