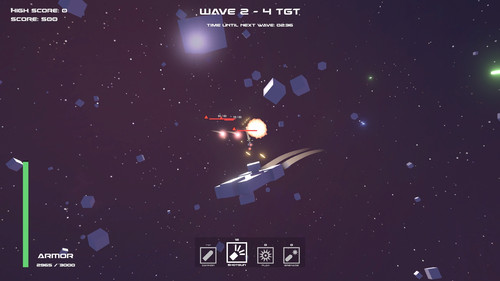 I had to make a lot of unfortunate cuts due to running out of time. It’s barely balanced, there’s a severe lack of enemy variety, and the only sounds are menu sounds, but at the end of the day it is a functional game. A game that was made in one week.

It’s been a grueling past 3.5 days. You eventually reach a moment where things are starting to come together and the crazy collection of mechanics, code, and graphics suddenly feel like a game rather than a test environment.

Tomorrow night I’ll create the itch.io page and upload what I’ve got. Prepare to be disappointed though, as the time crunch really hurt. The core gameplay and mechanics are all there and feel good, however there’s so many little things that I just didn’t have the time to get to.

A simple arcade game where you pilot a 3D space tank.